Fast Company and the WSJ announced recently that in New York and Portland, two high-rise buildings will be made not from concrete or metal, but a throwback material: good old trees.

It seems as if New York City is always under construction. Every few blocks, steel frames and concrete beams are formed and stacked high in the air. Now a new 10-story building in Manhattan is planned that will be unlike any other in the U.S: It will be made almost entirely from wood.

Wood is an old building material that has been getting a new life in taller buildings over the last five years. Around the world, 17 wood buildings have been built that are between seven and 15 stories tall—many of them in Europe. A record-high 35-story wood building is in the planning stages in Paris. But the U.S. has been slow to start exploring the recent advancements in wood materials that have made these taller buildings possible. None exist here today.

Last year, in partnership with the lumber industry, the Department of Agriculture announced a $3 million prize intended to spur tall wood building designs in the U.S.. Today, it announced two winners that will split the money: The 10-story residential condo, slated for Manhattan’s Chelsea neighborhood, and a 12-story retail, office, and apartment building in Portland, Oregon.

In the interest of creating rural jobs, the Agriculture Department has a stake in promoting wood, as does the lumber industry—which has struggled since the housing crisis. But there can also be major sustainability benefits to wood as a building material.

“As cities are growing, they’re using a tremendous amount of concrete and steel, and the problem with that is that concrete and steel have a very big carbon footprint,” says Vishaan Chakrabarti, a principal at SHoP Architects, which designed the New York City project.

In manufacturing and construction, wood generally has a lower carbon footprint than other common building materials. In addition, the wood itself stores extra carbon (at least in the U.S., where logging regulations are strict and trees are farmed, not deforested). Diseased wood from western U.S. forests afflicted by pests such as mountain pine beetle can even be used in newer advanced wood products. Normally, this dead wood adds to the fire risk when left in place.

Building taller and larger structures with wood has only become possible in recent years, as the industry has created denser, engineered wood products that are more flexible, stronger, and more fire resistant than the traditional two-by-four beam. But current U.S. building codes generally allow wood buildings to be only six stories or less, and regulators and designers are naturally wary of trying new methods. The goal of the competition is to demonstrate it can be done.

“If you think about traveling through New York City and seeing buildings being made from steel and concrete, and all of the sudden in the middle of all this, you see this new wood constructed building—it’s going to catch your attention. I think it’s going to create some real interest,” says U.S. Secretary of Agriculture Tom Vilsack. The stylish, upscale, 10-story Forte apartment complex, near the water’s edge in Melbourne’s Victoria Harbour, was built in 2012 with cross laminated timber (CLT), whose structural strength is akin to that of concrete and steel 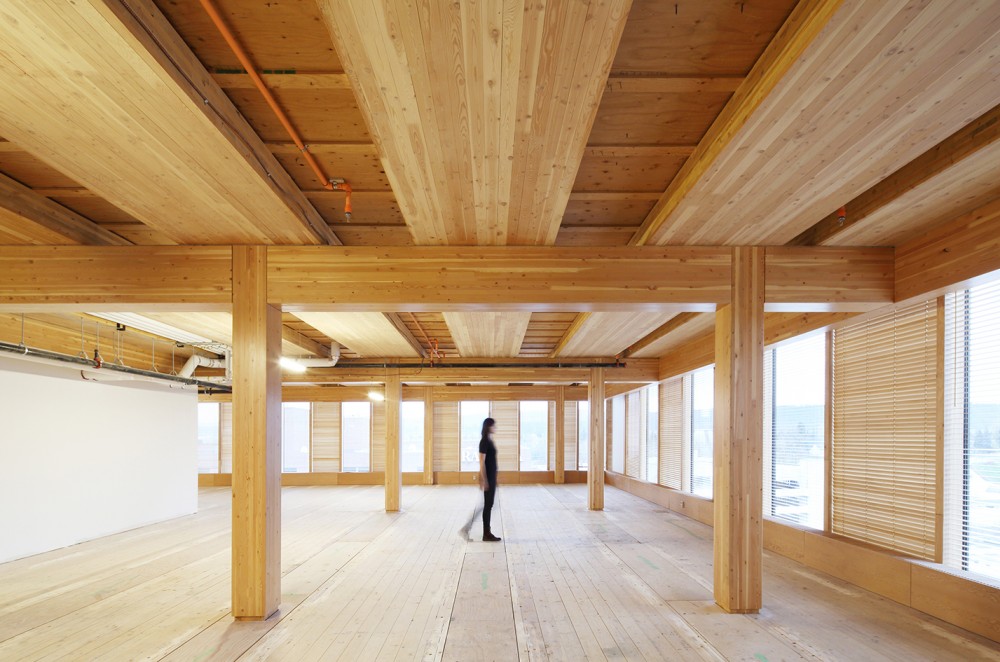 The Wood Innovation Design Centre (WIDC) serves as a gathering place for researchers, academics, design professionals and others interested in generating ideas for innovative uses of wood. The nine-storey building is the first of this height to construct load bearing walls and floor slabs as well as stair and lift cores entirely from timber.

Read more about Wood As a Sustainable Building Material

Check out the video on building skyscrapers with wood from Skidmore Owings & Merrill: