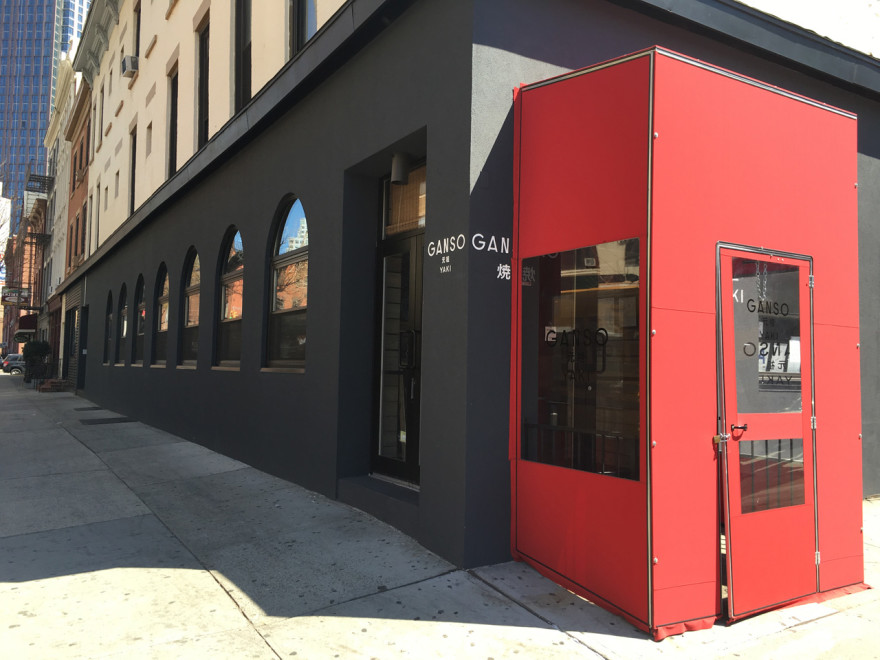 Sushi Ganso was designed by Amy Butchko of Butchko & Co. Amy worked with natural materials to create a casual, comfortable atmosphere that evokes a Japanese sensibility. On the wall opposite the sushi bar is a giant mural of a sea bream gyo-taku (Japanese fish print) painted by the renown New York-based Japanese artist Momoyo Torimitsu. The inscription below the fish reads, “I’ve come to Sushi Ganso to be eaten”.

Ganso has two other locations in Brooklyn – Ganso Yaki and Ganso Ramen – each with a different focus. Ganso Yaki is a Japanese izakaya restaurant that cooks bold, rustic Japanese soul food and grill. Taking inspiration from the alleyway shops, backstreet restaurants and mom & pop joints of the old Shitamachi section of Tokyo, the authentic dishes range from grilled fish, meat and yakitori to street food classics to seasonal vegetables to handmade soba noodles. Relying on the simple excellence of traditional ingredients and cooking techniques, Chef Ono’s expansive menu changes daily and with the seasons. Ganso Ramen is the only ramen house in New York to cook a classic, all-chicken, Tokyo ramen shop-style “mannen” stock. Mannen literally means “ten thousand years old.” It alludes to a traditional ramen technique of continually refreshing a rich, concentrated stock with newly cooked broth. Like feeding a sourdough starter to become more and more sublime, this technique creates more and more profound depth — so much depth, flavor and fragrance, it’s as if the stock were cooking for ten thousand years.

Ganso and reSAWN are aligned in that they both draw inspiration from the past to make something new.

reSAWN’s award-winning CHARRED collection pays homage to the traditional Japanese technique of “shou-sugi- ban” aka “yakisugi” without being literal. Historically very specific in their definition, “shou-sugi-ban” and “yakisugi” have become common nomenclature for modern charred wood designs in general. All of our CHARRED products are made in the USA at our facility in Telford, PA. We use domestic wood species whenever possible, including Cypress from the Southern US and domestic White Oak, Black Walnut, Red Oak & Ash as well as reclaimed woods from the US. Our designs have been carefully developed using modern finishes and incorporating our many years of experience in the architectural & design specification market. We pride ourselves on manufacturing charred wood products for a range of applications including exterior siding, interior wall cladding & flooring, and custom furniture.

With a nod to the past, we have taken charred wood to a new level of design – one that is informed by modern sensibilities & techniques – one that celebrates uniquely American wood sources & design aesthetics. Our CHARRED collection includes sustainable sourced North American White Oak, North American Black Walnut, North American Red Oak, Reclaimed Hemlock sourced from Pennsylvania and Southern US Cypress. Volume production for exterior & interior siding is accomplished using a proprietary, custom-designed machine. Furniture is charred by hand.

reSAWN TIMBER co. is family-owned and operated out of Telford, PA amongst the beautiful farm lands of Bucks & Montgomery counties. We ship anywhere in the USA & abroad. reSAWN works with an international network of distributors and sales reps to make our products easily accessible throughout the global design community. Having our manufacturing facility in PA makes us uniquely positioned to service the US East Coast market – we are about 45 minutes outside of Philadelphia, 2 hours from New York City and 4 hours from DC. Our materials have been installed throughout the Unites States, as well as in Hong Kong & Canada.